Notice Anything Funny About the Foods to
Avoid During Pregnancy?

At your first prenatal appointment, you'll get a list of foods to avoid during pregnancy in your packet of things to worry about.

The interesting thing about this list is that almost none of it is vegan. This is one of those times in our lives where we can don our smug vegan face and be comfortable knowing we're naturally doing no harm to our unborn child with our diet. 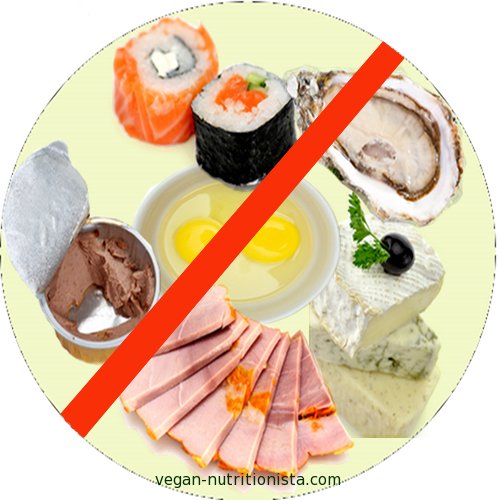 I found that the things that smelled the worst to me during pregnancy were often the ones on this list, which I find really interested. Your body has a way of warning you about what's dangerous to your unborn baby by making you want to vomit just by smelling them.

One of my worst times in the first trimester was when we got trapped in a crowd at the Pike Market in Seattle right near the raw fish section. My heart started racing, I could feel the back of my throat filling with that horrible slimy feeling, and I could barely get out the words to my husband to get us out of there before I lost it. Yuck. (I never lost it, btw.)

If you have a healthy relationship with your doctor or midwife (and you should, or you should find a new one), you have already explained that you're a vegan and s/he has already said they completely support your decision. S/he may ask you to keep a log of the foods you eat, just to guarantee you are getting enough calcium, protein, iron, folic acid, and other important nutrients during pregnancy. And, s/he will probably still hand you this list of foods to avoid during pregnancy, though maybe with a laugh saying you don't really need it.

[Warning, reading this list as a pregnant vegan may cause nausea. ;)]

To review the most common foods to avoid during pregnancy:

Soft cheese: Doctors worry the most about the unpasteurized cheeses that are imported from other countries because they could contain listeria, and listeria can cross the placenta and cause miscarriage.

Deli meat: Just like with soft cheeses, deli meats are more likely to have listeria on them and is therefore on the list of foods to avoid during pregnancy. The American Pregnancy Organization recommends that if you want to eat deli meat during pregnancy, you should reheat it until "it is steaming." That is appetizing.

Raw eggs: You'll be told to avoid eating raw cookie dough, salad dressings made with eggs like Caesar, and any homemade ice creams because raw eggs could carry salmonella.

Raw meat: Evidently raw meat has a higher chance of being infected with bacteria like salmonella, toxoplasmosis, and coliform. Really, you think? Perhaps they are considering the Consumer Reports study showing that more than 70% of store-bought chicken is infected with harmful bacteria? Or the Marler Clark study done in the Seattle area that found more than 80% of chickens from different stores contained "disease-causing bacteria," including 10% that had the antibiotic-resistant strain MRSA.

Pate: Meat spreads are on your list of foods to avoid during pregnancy. That darned listeria rears his ugly head in refrigerated pate.

Fish that are considered high in mercury: Studies show that consuming high levels of mercury during pregnancy can lead to developmental delays and brain damage. Doctors recommend that you stay away from those fish that are noted for their high levels of mercury, such as marlin, Ahi tuna, roughy, swordfish, shark, mackerel, tilefish, sea bass, grouper, bluefish, and other tuna types.

The American Pregnancy Organization has a chart outlining the levels of mercury in fish and the Food and Drug Administration has their own confusing version. They say that no more than 10 ounces of low mercury fish should be eaten weekly and that you should eat no more than three 6-oz servings of high mercury fish a month, avoiding the highest mercury fish completely. They do note that mercury levels can be different depending on where the fish is caught, but I didn't see them write anywhere that 1 in 6 children are born with mercury levels that are so high that they are higher risk for learning disabilities and motor skill impairment, as reported by scientists working for PBS.

I also found nothing explaining that most of the fish most of Americans eat nowadays is farmed fish, not naturally caught on the ocean (because we have fished over 90% of predator fish out of the ocean and are on our way to total destruction of that habitat). Those farmed fish are kept in incredibly close quarters and are fed food laced with antibiotics, growth hormones, and other chemicals, so their flesh ends up being higher in chemicals like mercury, and especially polychlorinated biphenyls (PCBS), the same stuff the informed consumer tries to avoid by buying reusable water bottles instead of plastic containers.

Raw shellfish: Another of the foods to avoid during pregnancy are uncooked or undercooked shellfish like oysters, clams, and mussels, primarily because those fish are likely to be exposed to red tides and have algae-related infections. (Red tides happen when the feces, urine, and toxic mix of chemicals from factory farms washes through the streams, lakes, and rivers down into the ocean and creates a dead zone where all the seaweed and animals die, creating algae blooms and red tides back on shore.)

Smoked seafood: Maybe you're thinking you'll just avoid all the health risks of raw and high-mercury fish by eating smoked seafood. Not so fast... the APO says to stay away from lox, nova, and any other smoked seafood you can buy in the deli section.

And lastly, unwashed vegetables: The American Pregnancy Organization advises you wash all your vegetables to ensure you don't get toxoplasmosis from the soil they grew in. I also advise you wash them in case you're eating any non-organic produce so you can wash a bit of the pesticides and fertilizers off.

Now, this I ask... if there are such higher levels of mercury, PCBs, listeria, salmonella, and other bacteria in these foods, why would you ever want to eat them? What level of salmonella are you willing to accept into your body, with the cloudy guarantee that you are at a lower risk of developing illness when you're not pregnant than when you are?