The Vegan Pregnancy Survival Guide is the perfect size book to tuck away into your handbag and browse while sitting in the waiting room at the doctor's office. 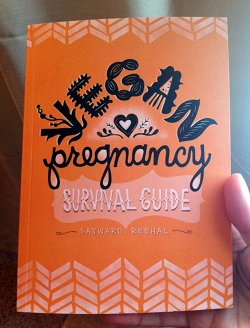 It's written with a really positive, helpful tone that reminds me of listening to my best friend talk. And, as if we're having that conversation, as soon as I think of a question in response to something Sayward's writing, it appears in the next section.

I think the Vegan Pregnancy Survival Guide is absolutely perfect for a vegan woman who is newly pregnant and wondering what adjustments she needs to make to her daily regime to make sure her baby is healthy.

If you're brand new to veganism and perhaps less "crunchy" or natural, you might be taken aback by some of the ideas and concepts. For instance, Sayward is very open about having eaten her placenta, and she fully believes it improved her post partum recovery time. If you're familiar with the natural childbirth world, then you've likely heard about people eating placenta before, and maybe it doesn't faze you.

However, even a new vegan and new pregnant woman would learn a ton in this book. It's a quick read, which is good for baby brain, and you can reference in the future when you run into new questions.

I wanted to learn more about the author, Sayward Rebhal, and I think you'll love her responses about vegan pregnancy as much as the Vegan Pregnancy Survival Guide itself. Check out our interview below:

1. Though you can't compare your vegan pregnancy to a non-vegan one, what benefits do you think you had, whether physically or psychologically from being vegan while pregnant?

I think for me, the greatest benefit of my veganism was actually psychological. Because let’s be honest – you can eat a wholesome vegan diet or you can eat an unhealthy vegan diet, just like you can eat healthier as an omnivore, or you can eat toxic processed “food products”. Eating right while pregnant is more about making the right choices throughout each day, as opposed to a general food philosophy.

However, when I’m living a vegan lifestyle, I feel an overall sense of centeredness and assurance that I never experienced when I was eating animals. Because no matter how “healthy” I may have been eating, there was always an underlying disharmony between my meals and my ideals.

Pregnancy can be a really stressful time, and every little bit of stress-relief helps. For me, the greatest way I can achieve that is by acting authentically and living my truth. And veganism is my truth.

2. Every pregnant woman endures a tirade of opinions and questions from onlookers - both strangers and friends/family- but it seems like vegans get even more heat. Do you have advice on simple, non-combative way to respond to people who ask judgmental questions like, "Is it safe to be a vegan during pregnancy?" and "Are you going to raise your baby vegan too?"

Absolutely, and I discuss this at length in my book (Vegan Pregnancy Survival Guide), with a variety of hypothetical scenarios. But the short answer is, I always try to approach these interactions as an opportunity for education. Think of it as outreach, a chance to lead by example as you represent health, confidence, and compassion in the name of veganism.

These sorts of questions – even when they’re posed in an offensive way - offer a chance to engage in a very important dialogue. The person asking has opened up the “Why vegan?” door! So keep your cool, speak from a place of love, and kill ‘em with your kindness.

3. A lot of women tell me they stopped eating vegan when their body told them it wanted something non-vegan. In your book, you talk openly about having weird cravings for non-vegan foods. What do you recommend to women who think that cravings mean their body needs that food, and how can they get over those cravings?

Well to be totally honest, I’m just not one of those people who believes that “the body always knows best”. I know it’s not a popular opinion! But really, if I listened to the “wisdom” of my body, I would never have quit smoking, because my body was pretty dang insistent that it needed those cigarettes.

The truth is, there’s so much more to cravings than simple biochemistry. Emotion, psychology, and nostalgia play an incredible role in forming these urges, and I think this is especially true in pregnancy. As I write in the book, “Our cravings during pregnancy require that we intervene with our minds to assess the true needs of our bodies.”

The need may be simply emotional, and require a creative solution such as recreating a vegan version of your favorite childhood casserole. Or, it may be nutrition-driven after all.

For example, a few months after I went vegan, my body started asking for burgers. I was getting strong signals, but I suspected that what I really needed was iron. So I started eating massive spinach salads instead. A few days of those, and the cravings went away. After a few rotations of that scenario over the course of a year or so, I’d re-trained my body to ask for spinach instead of red meat.

So I say, give yourself some time and be willing to experiment. You’re up against a lifetime of history and association, both emotional and physical. Try to work with yourself, instead of against the craving.

4. What's your favorite go-to meal for nights you're too busy to think? Do you prepare anything different for your son, or does he eat along with you?

We eat a lot of simple foods, like giant salads with soup and bread, or roasted veggies with quinoa pilaf. I’d say our standard go-to meal is a bean/green/grain bowl, smothered in my raw tahini sauce.

My son is pretty picky so although he eats healthy foods, they’re often different from what we eat. He likes plain things, like cold uncooked tofu, or unseasoned beans right from the can (rinsed first), or peanut butter off the spoon. The only veggies he eats are raw cucumbers, bell peppers, and red onions. But he’ll drink any vegetable I serve, so we do a lot of green juices and green smoothies. Toddlers are tricky, man.

5. I find a lot of aspiring moms worry about what milks to feed their children rather than cow's milk. How do you feel about non-dairy milks and soymilk for young children?

The main reason that doctors push [dairy] milk is because it’s high in fat and it’s a good source of calcium: both things which growing bodies need. A lot of plant milks are actually made to be low in fat, which is not ideal for children. They also tend to be lower in protein (save for soymilk, which is a whole other conversation). Most are fortified with calcium so that’s a non-issue.

Ultimately, there are plenty of ways to secure these nutrients (fat, protein and calcium) from other sources, and my pediatrician (she isn’t vegan but her children are dairy-free) didn’t see a need for us to use any dairy “replacement”. We went without it for a long time.

I actually started giving my son dairy subs simply because I was looking to get more calories into him. If this isn’t an issue for you (my guy is very active and not a big eater) than I see no need for milk – a healthy diet should be plenty sufficient. But if you do want to use milk, I make my own fortified almond milk at home, and we love it!